Is a Leaner and Focused Snap Set to Win? - 7investing

Is a Leaner and Focused Snap Set to Win?

On August 31, Snap (NYSE: SNAP) announced a restructuring and refocusing of its business via a filing with the SEC. The company is caught with an elevated cost structure amidst a dramatic slowdown in its advertising business and thus is looking to right-size costs by reducing full-time headcount by 20% and shutting down several projects. Alongside this news, Snap also released an updated investor presentation that disclosed year-over-year revenue growth for the third quarter of 2022 (through to August 29, 2022) of approximately 8%. The company believes that the improvements to the cost structure should allow the business to deliver positive free cash flow in 2023, even if growth rates remain muted.

On the chopping block

The SEC filing also includes the letter co-founder and CEO Evan Spiegel sent to the Snap team when announcing the layoffs. It makes for an exciting read, so I encourage interested readers to pursue it. Here’s Evan explaining what is being cut and why:

We are restructuring our business to increase focus on our three strategic priorities: community growth, revenue growth, and augmented reality. Projects that don’t directly contribute to these areas will be discontinued or receive substantially reduced investment. We have worked thoughtfully and deliberately to find the right balance between focusing our investments while continuing to innovate, and we have made the decision to discontinue our investments in Snap Originals, Minis, Games, and Pixy, among other areas. We have also started the process of winding down the standalone applications Zenly and Voisey.

At a high-level, many of these changes make much sense. I understand the motivation behind creating original content, especially if you want to create experiences around augmented reality (AR). But with AR still too early in the technology development and adoption curve, this might have been an effort that was too early and too expensive.

The other high-level observation. Perhaps Snap was trying too many things for a company of its size. Low cost of capital and high growth rates sometimes entices businesses to try too many things at the expense of profitability and focus. The Minis, Games, and Pixy flying camera seem to fit that category.

Also getting the boot are two apps – Zenly and Voisey – that Snap had acquired. Zenly is an app that lets friends share locations on a map. Snap acquired this Paris-based startup in 2017 and this app has a lot in common with Snap Map. Snap paid around $250 million for this acquisition. I suspect Snap has moved underlying technology from Zenly over to Snap Map. Whether or not this acquisition would involve a writedown remains to be seen.

Voisey, acquired by Snap in late 2020, was a UK-based startup. This app features instrumental tracks on which users can overlay their voices to create short music clips in both audio and video formats. At one point, Voisey was described as the “TikTok for music creation,” so one can see why it might have appealed to Spiegel and his team from an optionality standpoint. However, it isn’t clear how Voisey fits into Snap’s larger vision.

Snap’s management believes their cuts will save them $500 million annually relative to their “cash” cost structure in the second quarter of 2022. Note that cash costs don’t include non-cash stock-based compensation (SBC); thus, with a reduced headcount, I might hope for lower SBC expenses going forward.

Snap’s Q2 2022 report showed revenue growing year-over-year by 13%, but total costs and expenses increased by 29%. That trajectory is unsustainable, more so in the current environment where advertising budgets are under pressure, and there is uncertainty stemming from Apple‘s (NASDAQ: AAPL) changes that bolster consumers’ privacy. Snap knows it has to act to survive. The question is, will it?

The company’s restructuring decisions seem to be about right. But one could certainly question why Snap, in the first place, was pouring cash into original content creation and various hardware endeavors. I know every company looks at the success of Apple in consumer electronics and thinks they should be in the game, owning the underlying platform. Still, no one seems to think twice and consider the long list of failures. I hope the $250 million spent on Zenly was worth it for Snap Maps because if it wasn’t, it shows some lapse of judgment on the capital allocation front. 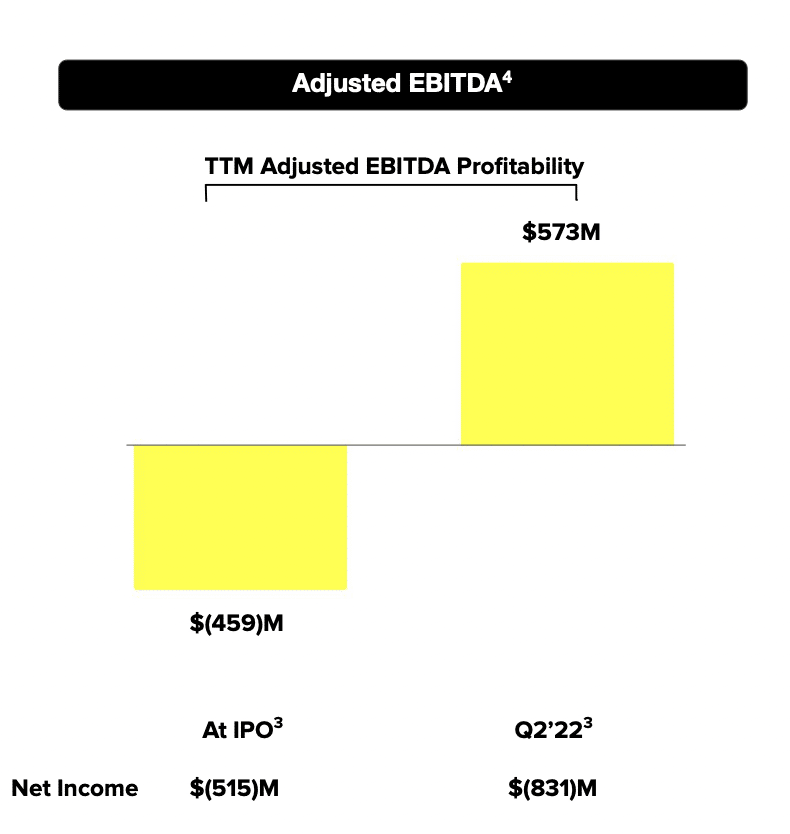 That brings me to the company’s SBC and dilution management strategy. Snap’s latest slide deck includes some curious graphics around profitability. Since the company’s IPO in 2017, revenue has grown 10-fold, but its net losses have also increased. However, Snap implies that it is generating operating profit on an adjusted basis to the tune of $570 million on a trailing twelve-month basis versus losses in 2017.

The magic here is SBC, which has ballooned from a mere $32 million to $1.2 billion! Yes, SBC is non-cash, but it is dilutionary, which is why the company is buying back shares. Snap, in its presentation, told us that they have used all of their $500 million authorization to repurchase about 3.1% of shares outstanding at an average price of $9.75.

In Snap’s words, “our initial stock repurchase program more than fully offset all SBC-related dilution from the trailing 12 months“. On the surface, this seems like a good deal, given the company is buying back $1.2 billion of SBC dilution for $500 million, largely thanks to the steep drop in the stock. The more significant issue, however, is what happens going forward. Will the company continue to issue huge chunks of SBC? And will the company eventually see its fortune turnaround, resulting in a reversal of the stock decline, which might make these buybacks look great.

A lot is going on at Snap. Right-sizing the cost structure and focusing on its core offering is necessary for the business. However, a big restructuring event such as this one touches almost everyone in the company, potentially impacting the morale and confidence of employees. Then there’s the big question of the everchanging taste of users. Will users continue to love Snapchat? Will the company be able to keep the app relevant with changes in consumer preferences? There’s a fair degree of uncertainty about the company’s future prospects.

Of course, we say that Snap’s stock price plummet of 85% in the past year already bakes in the worst-case scenarios. But does it really? Snap has a market capitalization of $18 billion. If the company doesn’t return to growth and delivers sustained free cash flow (with acceptable levels of SBC dilution), the valuation could see further battering.

Would Snap be an attractive acquisition target? The current market capitalization implies the acquirer would have to be a big fish. Meta (NASDAQ: META) would probably face plenty of scrutiny if it even remotely tried! Alphabet (NASDAQ: GOOG), Amazon (NASDAQ: AMZN), or Microsoft (NASDAQ: MSFT) might be other potential suitors, with the latter two making advertising a much bigger focus lately.