“Gather ’round investors, hear my tale of woe.
‘Tis a story of how this fool missed out on making dough.
To what do it I owe?

My own foolishness is the culprit,
I have no one else to blame.
Others told me The Trade Desk was a good pick,
But I was distracted by lesser companies, like a moth to a flame.”

Our story takes us back to a simpler time, the summer of 2017. No one was worried about wearing a mask, restaurants were open, bars were crowded, and the connected TV space was still a nascent industry that most investors still hadn’t discovered.

During this simple time, I became aware of The Trade Desk (Nasdaq:TTD), a technology platform for ad buyers. The company seemed well-positioned to capture the growth in this emerging market and was led by a visionary founder. Many investors I trusted and admired heartily recommended it as an investment and I was happy to get in at that price. As summer turned to fall, I initiated a position a little above $60.

I don’t mind taking starter positions in companies before studying them. Usually, when I take a position, it motivates me to study the company further and make an informed decision about whether the company is a “keeper.” The problem is I sometimes get lazy, depending far too much on others’ opinions without knowing enough to make my own. Unfortunately, when a stock price sinks, others’ opinions matter less and less. A hard truth about investing is that it is very difficult to borrow conviction.

Fast forward six months and my position in TTD was down about 20%. I wanted to raise cash to fund other investments and decided to exit my entire position. At the time, the stock price had done nothing but drift down for what seemed like forever. Funny, isn’t it, how the present so often seems longer at the time than it does as you reminisce? 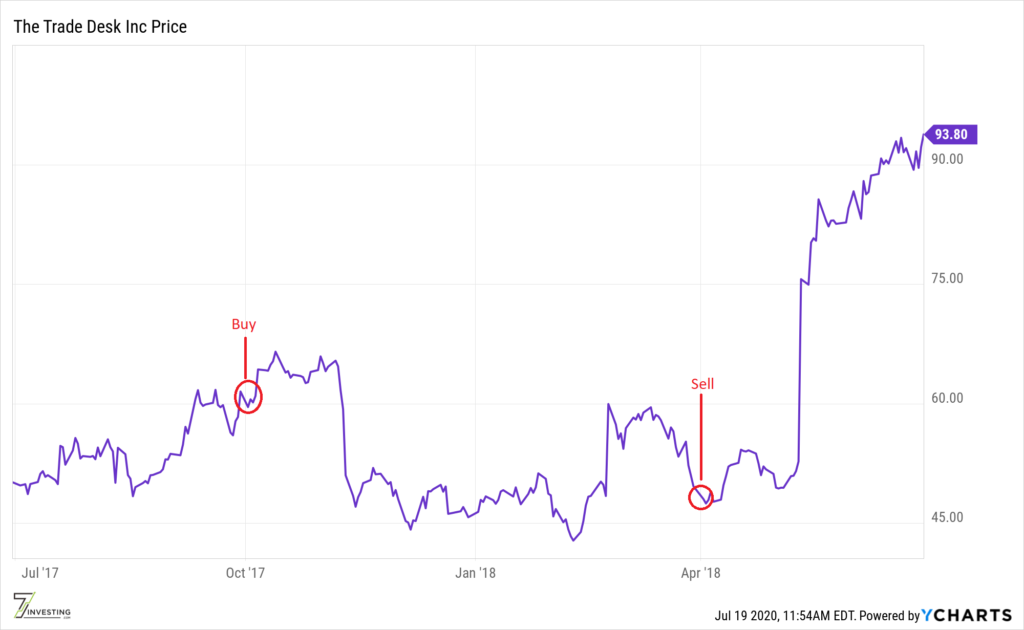 Of course, shortly after I sold my position, The Trade Desk took off. The problem was my impatience with the price action, even as the fundamentals of the story played out according to my thesis. If I had just done a smidgen of research, I would have realized this. What made matters so much worse was that I compounded my mistakes of impatience and laziness with price anchoring, a behavioral bias that caused me to anchor my opinion of TTD’s valuation on the price I had originally bought and sold it at rather than what the fundamentals dictated. To this day, I have never bought back into The Trade Desk, causing me to miss out on a near 10-bagger from where I sold my position.

Here’s how silly my buy and sell decisions look from a present-day perspective. What looked like such dramatic moves at the time were revealed to be mere speed bumps on the way to greatness. And that, my dear readers, is how I became one of the few Trade Desk shareholders to ever lose money.