Steve describes how NVIDIA was his greatest selling mistake.

Let’s rewind to just over five years ago – in late-May 2015 – to detail the circumstances leading up to one of my greatest investing “mistakes.”

Given relatively attractive interest rates and a favorable local housing market at the time, my wife and I had decided to put our then-current house on the market in an effort to see if we could seize the opportunity to upgrade to our “forever” home.

We were stunned in the best way when we secured a buy-sell agreement on the old house within just two days at near our asking price. But the fast-moving market also left us scrambling to decide in short order between several “forever” home options on the market in the neighborhoods we desired. Within a few weeks, we were overjoyed and under contract on our dream home, and set to close on the new mortgage by the end of July 2015.

However, the modest profit from our smaller pending home sale didn’t fully cover the required down payment on our new home. So I needed to raise some extra cash to make the deal happen.

I turned to my equities portfolio, paring down a number of positions that, in retrospect, I now wish I’d simply continued to hold in keeping with my mindset as a patient, long-term investor.

That said, some of the stocks I sold at the time are admittedly worth less on a per-share basis today than they were five years ago. So I don’t feel too bad about my stock sales as a whole.

But one particular sale still makes me cringe more than any other: NVIDIA (Nasdaq: NVDA).

All told, in preparation for my upcoming down payment, I decided to part ways with 249 shares of the graphics processing unit (GPU) leader for proceeds of just over $5,400 – or an average of roughly $21.82 per share.

I felt fine with the sale at the time considering most of those shares had already more than doubled or tripled from my cost basis. But as my longer-term “buy” thesis began to truly play out and demand for NVIDIA’s innovative GPUs soared across virtually every industry vertical, here’s how NVIDIA stock has performed compared to the S&P 500 since then: 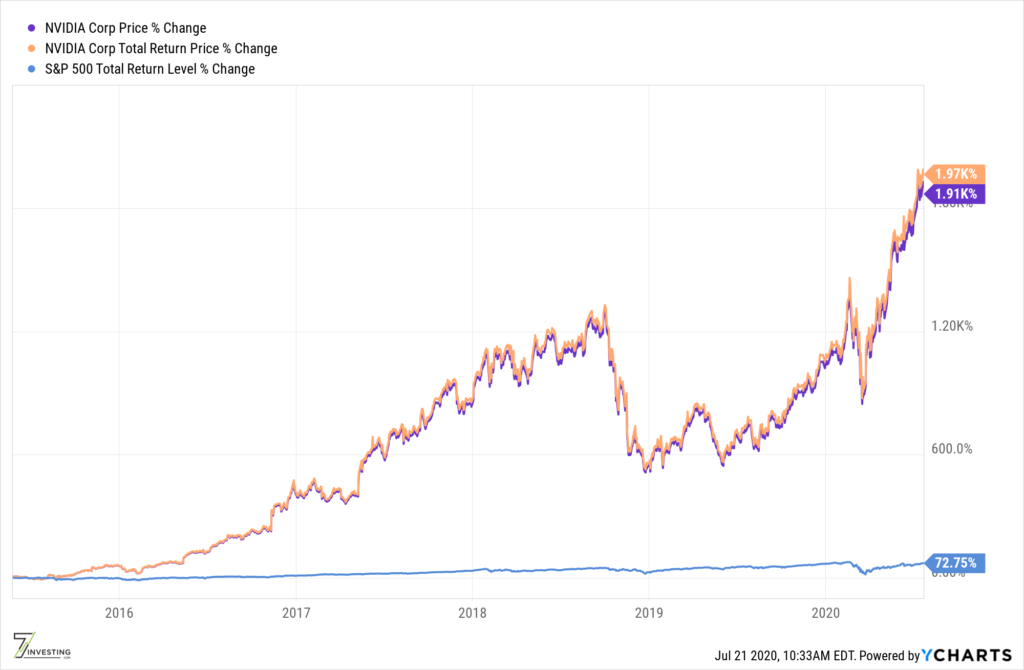 Based on NVIDIA’s current share price of $420.43 as of this writing, my stake would have been worth almost $105,000 today had I simply held my position. That means by selling five years too early, I missed a potential gain of nearly $100,000 from my NVIDIA sale alone.

Spoiler: That’s well over the value of the entire down payment I put on my new home.

To be clear, that’s life. I needed to raise funds for my home – an asset I don’t consider an “investment,” per say, but rather a fantastic purchase in the sense it’s an ideal place for my family to live and thrive – and I sold partial positions in a basket of stocks to that end without regret.

But in examining the stocks I sold more closely like NVIDIA – a business whose “buy” thesis I believe is still intact even today –  I relish the chance to learn and grow from the experience as an investor in order to avoid making similar mistakes going forward.