Teladoc's Stock is in the ER: "Does it Hurt When I Press Here?" - 7investing

Teladoc’s Stock is in the ER: “Does it Hurt When I Press Here?”

Teladoc’s Stock is in the ER: “Does it Hurt When I Press Here?”

Teladoc Health (NYSE: TDOC) is having a medical emergency, and leadership appear to have been caught wrong-footed by changing market dynamics. Is the prognosis fatal for this one-time telemedicine leader?

The company released disappointing Q1 results last week, and the market responded with a 40% one-day drop in valuation. Although customer and revenue growth was broadly in-line with forecasts, CEO Jason Gorevic highlighted the growing competition from well capitalised health-tech startups, resulting in increased costs for paid search and a lower than expected return on marketing spend. These are clear signs that Telemedicine is becoming a commoditised sector, and thus far Teladoc has not demonstrated that it has a differentiated service.

This presents the concern that the company may not have pricing power, potentially constraining revenue growth in the future.

How are the patient’s vitals, Doctor?

The headline news in Teladoc’s Q1 announcement was that the company has taken a $6.6 billion goodwill impairment charge. Although this is an alarming figure at first glance, goodwill adjustment is standard accounting practice when the fair value of an asset drops below its previously recorded value. In Teladoc’s case, a revaluation of Livongo (originally acquired in 2020 for $18.5 billion) was required to reflect the overall value of the company in current market conditions – hence the impairment charge is more a symptom of the reduced value of Teladoc, rather than a cause.

In the April earnings call, Gorevic highlighted that Teladoc’s customer acquisition costs have increased as a result of lower yields on advertising spend. The company’s hypothesis is that smaller venture-backed competitors are operating in an unsustainable way by buying up customers, and by taking advantage of the temporary suspension of certain regulations associated with the national health emergency concerning the prescription of controlled substances. Although Gorevic’s hypothesis may be correct, perhaps given the levels of emerging competition Teladoc is now seeing, this is simply the new cost of doing business?

In Q1 results, Teladoc reported US and international revenue growth that was largely in line with forecasts. However, noting that international remains only 15% of total revenues, it will take many years for growth outside of the company’s home market to be material to overall business results.

US member growth remains essentially flat. Teladoc currently has around one in six Americans as members, and future growth in this area is likely to remain stifled.

As the volume of paid US users is not anticipated to increase materially in the future, revenue growth in this market will be driven by increases in average revenue per member per month. In the most recent quarter, this increased 21% YoY to $2.52.

Although in line with forecasts, this is actually quite a large increase on a percentage basis. If the telehealth market is becoming more competitive as Gorevic suggests, an investor might reasonably question how long the company can sustain this level of cost increase. To maintain its pricing power and justify the greater wallet share, Teladoc would either need to provide a superior or a more comprehensive solution than competitors – if future revenue per customer stalls (or reverses), Teladoc’s valuation will flatline.

In the earnings call discussion, Gorevic suggested that once the Coronavirus emergency pandemic measures are lifted, competitors acting in an unsustainable manner will be exposed. However, we should consider the fact that Teladoc itself may be riding the tailwind of these measures, and could find revenues impacted if reimbursements for telehealth are no longer paid at parity with in-person visits. If this policy is changed when the US government take reimbursement decisions for 2023 or 2024 (announced each November), Teladoc’s revenues will suffer.

In Q1 the company posted adjusted EBITDA of $54.5 million (-4% YoY). CFO Mala Murthy highlighted that EBITDA is expected to improve in later quarters of the year, in-line with typical advertising spending patterns. 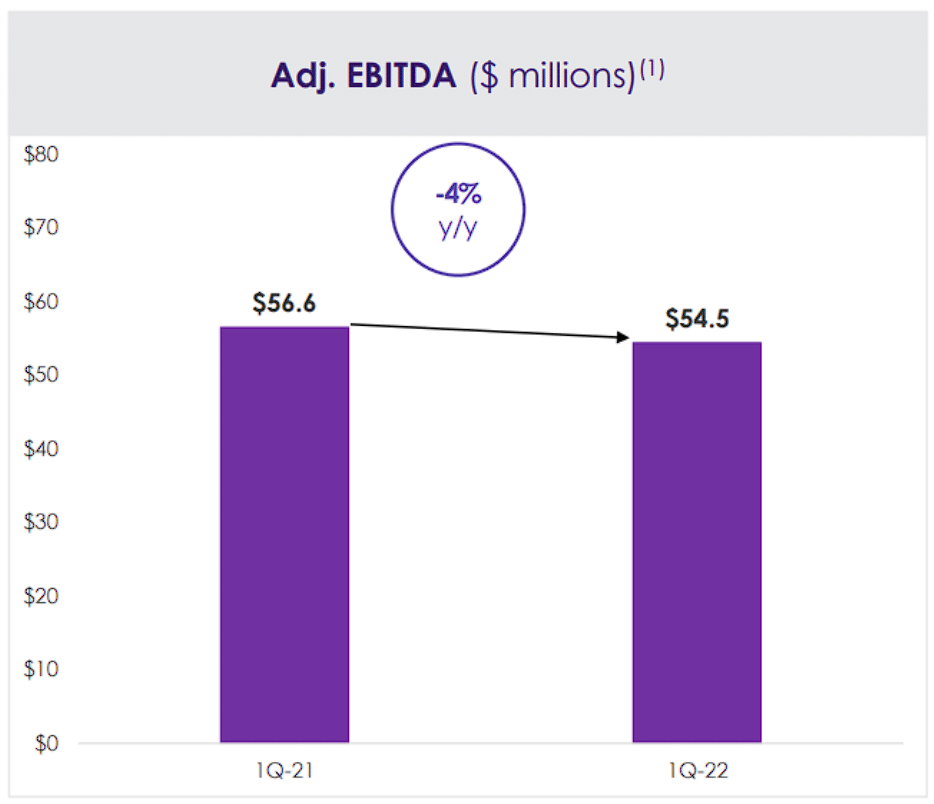 In one small piece of good news, Teladoc remains free cash flow positive generating $98 million in the most recent quarter. The company currently has $839 million in cash and long-term debt of $1.5 billion.

Following the precipitous decline in the stock price, Teladoc is currently valued at just 2.5x sales. Although it is not out of the question that leadership can return the company to sustained growth, in my opinion, this is unlikely.

Basic telehealth is now a commodity business, Teladoc’s advantage came from the integration between Livongo and Primary360, but this is yet to be demonstrated commercially. No material progress was shared on Primary360 rollout in the latest earnings call, and it is likely to be a one to two-year wait before an investor can confidently assess if the model is successful and can be a driver of future US revenue growth.

The capital allocation decision to acquire Livongo has proven to be disastrous for the company. The tone of the April earnings call was somewhat laden with excuses, and by leadership’s own admission they currently only have a working hypothesis as to why customer acquisition costs have risen.

An investor may wish to consider the possibility that Teladoc might itself be an attractive acquisition target at the current enterprise value of $6 billion. While this could make sense to a competitor such as Walmart (NYSE: WMT) or perhaps Amazon (NASDAQ: AMZN) to support the US rollout of Amazon Care, no indication of interest has been suggested publicly, and it may be that these companies simply believe they can build their healthcare networks organically, and may not see value in Teledoc’s portfolio of intellectual property or technology.

I think it is reasonable to expect Teladoc’s valuation to underperform the market for at least the remainder of 2022. If signs of renewed growth and sustained pricing power can be demonstrated when the company rolls out its ‘whole-person health’ solution, Primary360, it may be a candidate for future reinvestment, but at the current time, there are likely to be superior options for an investor wishing to redeploy their funds – perhaps a company from 7investing’s universe of stock recommendations?

Click here to subscribe to 7investing, and gain access to all of our current and past top stock recommendations, world-class research portal, and community discussion forum.