Is There More to Target's Recent Profit Downgrade? - 7investing

Is There More to Target’s Recent Profit Downgrade?

Is There More to Target’s Recent Profit Downgrade?

Target (NYSE: TGT) recently announced a profit downgrade driven by a plan to right-size its inventory. The company’s announcement noted that they are “planning several actions in the second quarter, including additional markdowns, removing excess inventory and canceling orders.” The company’s inventories stood at $15 Billion at the end of Q1 2023, up 43% year-over-year.

The inventory situation had received its fair share of attention during the company’s Q1 2023 conference call. During the earnings call, management noted that they had expected a post-stimulus slowdown to affect apparel, home, and hardware categories. However, the year-over-year slowdown appeared to catch the company off guard. Interestingly, Target noted that they had excess inventory in bulky items such as kitchen appliances, TVs, and outdoor furniture, with management noting:

As we developed our plans for the quarter, our task was to anticipate how spending would change under circumstances no one had ever seen before given that we were about to compare over 2 years of historically high federal stimulus payments. As such, we relied on numerous forecasts and estimates, both internal and external, to help determine our view for the quarter. Despite this careful approach, the mix of actual demand materialized differently than we had anticipated.

Target’s management then was left with some difficult decisions. Should they keep the bulky items and hope to sell them during the year? Or should they mark down products to make room on shelves and warehouses for other products? They had “incremental markdowns” in the first quarter to deal with the excess inventory. However, the recent profit downgrade suggests they need to be even more aggressive with markdowns.

The strength of the markdowns shouldn’t surprise us. For a company that generally has only modest growth in inventory, a 40%-plus change is out of the ordinary. 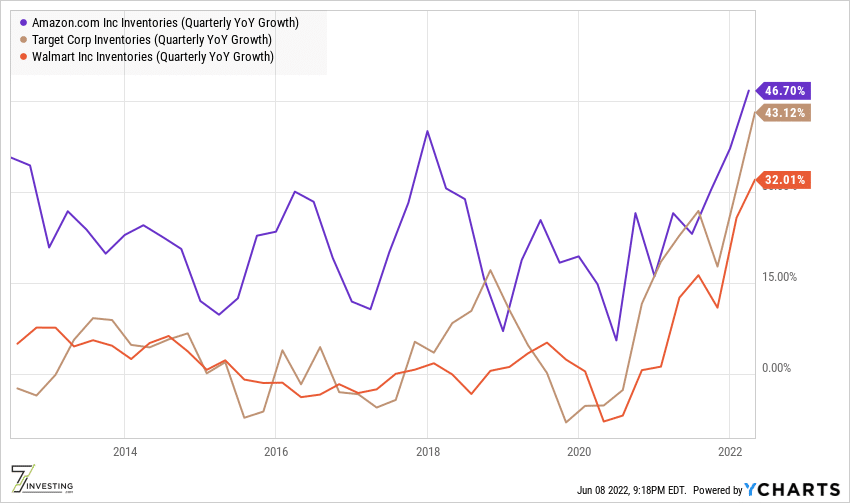 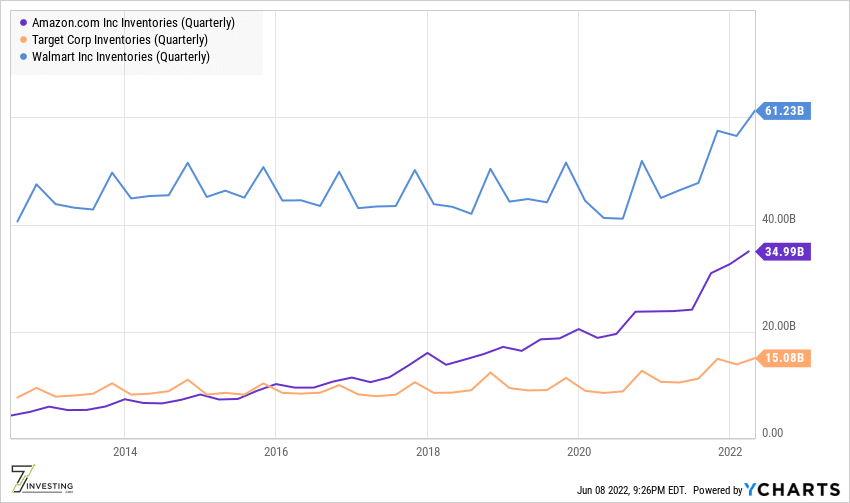 But this isn’t just a Target problem. As shown in the graph below, several other retailers are stuck with record-high inventories. Walmart (NYSE: WMT) CFO Brett Briggs had the following comment regarding high inventory levels:

We like the fact that our inventory is up because so much of it is needed to be in stock on our side counters, but a 32% increase is higher than we want. We’ll work through most or all of the excess inventory over the next few quarters.

Brian Olsavsky, Amazon‘s (NASDAQ: AMZN) CFO,  didn’t specify touch upon inventory buildup during their earnings call. However, he discussed overstaffing on the labor front and excess capacity in their fulfillment network, noting that the company will need a few quarters to grow into the capacity buildup.

I think Target is just the first shoe to drop, with others like Walmart and Amazon to follow. Many retailers, it appears, made more allowances for what now seems to be a “transient” increase in demand, driven by lockdowns and government stimulus. With stimulus and lockdowns unwinding, consumers are shifting their spending to things like travel and experiences.

It could be argued that businesses are responsible for the supply chain pain points. Many companies looked at rising TV and appliance sales and thought the phenomenon would continue ad infinitum!

Overall, the excess capacity and inventory situation isn’t good for retailer earnings. It might, however, be welcome news for consumers reeling under back-breaking price increases. Perhaps to some extent, liquidation of excess is also indicative of easing of strain on supply chains.