Is This the End of Long-Term Investing? - 7investing

Is This the End of Long-Term Investing?

Is This the End of Long-Term Investing?

My what a rollercoaster these past twelve months have been.

A year ago, optimism reigned. Everyone seemed happy, and every investor felt like a genius. There were Twitter posts boasting about portfolio gains, fast-growing tech companies raising money at egregious valuations, and NFTs of bored apes selling for millions of dollars. People were refinancing homes at record-low interest rates and were retiring early. The most important thing news headlines could complain about were ships getting stuck sideways in the Suez Canal.

Fast-forward to today and it’s a completely different story. Inflation’s hitting a four-decade high. The Fed’s predicting it will hike interest rates no less than seven times this year. And there’s a war spreading across Eastern Europe.

Unsurprisingly, the always-forward-looking stock market has responded with the sad face emoji to all of the pessimistic financial news. The S&P 500 has fallen 10% from its 2021 peak, while the tech-heavy Nasdaq is down more than 20% and is now officially in a bear market.

Those numbers might not sound all that dire here in the context of this article. But they’re much more real when you’re staring at losses in your actual investment portfolio.

The Sector Rotation is Underway

Driving much of the selloff is the infamous “sector rotation” already underway at many of America’s largest financial institutions. When large funds move massive amounts of money from one strategy to another, it creates a lot of selling pressure that drives down the stock prices of the strategy they are abandoning.

In response to those previously-described sad-face-emoji challenges, fund managers have prioritized preserving clients’ wealth above overall returns and they are moving their money from “growth” to “value” stocks. Funds characterized as Large Growth have experienced more than $100 billion of outflows (money being taken out of the funds) during the past twelve months, while Large Value funds have received $92 billion of inflows and Large Blend funds have received $206 billion (all data and fund characterizations are provided by YCharts’ Fund Flows reports and are as of 2/28/22).

That’s a ton of cheddar! A lot of people who are managing money for others are moving with the herd and are collectively transitioning to a risk-off investment strategy.

And there are many people who are following that cheddar crumb trail. Those same macroeconomic headwinds that are driving down the broader market as a whole are actually serving as tailwinds for a few companies who are benefiting from them. Energy — specifically rising gas prices — has been one of the most significant contributors to inflation during this past year. Those rising gas prices, complemented by restrictions imposed on Russian exports, have driven the quarterly earnings numbers higher for integrated oil companies like Exxon (NYSE: XOM) and Chevron (NYSE: CVX). The Energy Select Sector SPDR ETF (NYSE: XLE) as a whole is already up more than 43% this year, vastly outpacing the (6%) return of the S&P 500.

In other words, several investors are selling their riskier growth stocks and and re-allocating the funds more risk-averse sectors such as energy. That’s driving down the stock prices of Large Growth and is driving up the prices of Large Value. 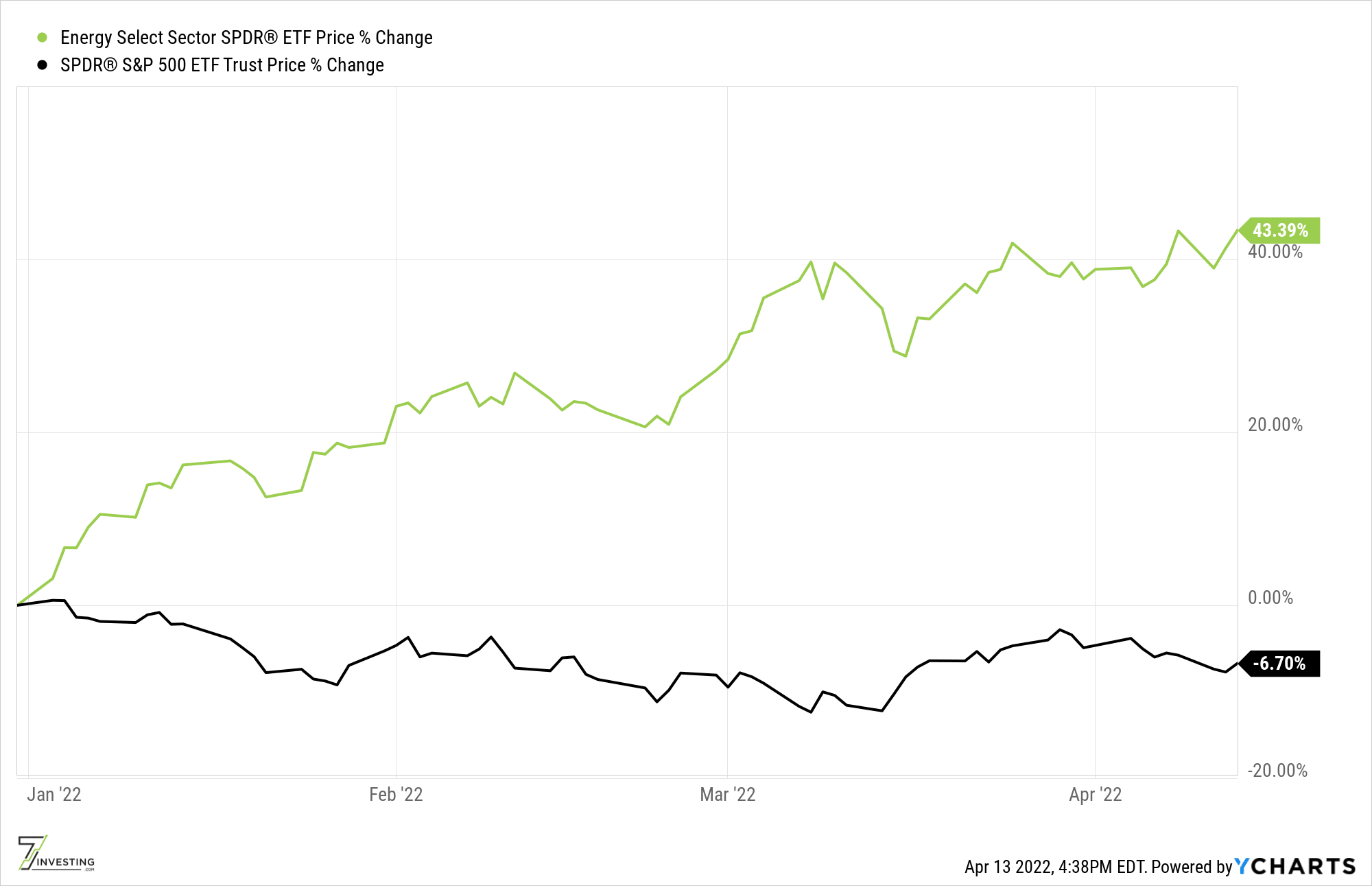 Elsewhere, there are other investors who are actually embracing the market’s gut-wrenching volatility.

Short-term options traders are getting their time in the sun, boasting loudly about the outsized returns they’re capturing from placing bets on extremely-risky trades like triple-leveraged indexes. These financial derivatives — which Warren Buffett has described as “financial weapons of mass destruction” — have become popular in recent months, as a way for speculative traders to bet on the short-term movements of the stock market or any of its sub-sectors.

Strategies like these work until they don’t. It’s not just a coincidence that many day traders end up going bankrupt.

Is the Market Having an Identity Crisis?

Between the inflows into risk-adverse investments and the rising popularity of short-term options, many buy-and-hold investors are being led to question their resolve.

It’s absolutely zero fun to see the companies that you’re holding in your account fall 20%, 30%, or more. And it makes it even worse when the FOMO bug is biting you, and you’re seeing others boast about the profits they’re making from shifting strategies or by playing with options.

In other words, is this the end of long-term investing?

To be clear, I’m not an advocate of using options, margin, day trading, or buying or selling any short-term, leveraged instruments. There is absolutely no way to know what will happen in the short-term, and strategies like these can very quickly completely wipe out your account. You wouldn’t bet your retirement or your upcoming mortgage payment on the Roulette wheel (I hope). So please don’t use speculative trading as a viable financial strategy.

It also turns out that it’s very hard to predict the market’s mood swings over longer periods of time as well. You’ve likely already heard the phrase “past performance is not a predictor of future performance.” Gains are always in the rear-view mirror. And there’s no promise that what’s in favor today will remain there tomorrow.

It might seem easy and intuitive to move your capital to more defensive companies when the market is going into risk-off mode. But if you’re not planning on keeping your investment in those defensive companies for the long-haul, you’ll also need to know exactly when to move it back. The pendulum will eventually swing in the other direction.

That pendulum swing happens quite abruptly, and missing out on it can really hurt your performance. The returns of a portfolio invested over the past fifteen year period would be cut in half if they missed even just the 10 best-performing days. “Time in the market” produces returns that are superior to “timing the market.”

On top of that, the market’s most-favored-sectors aren’t actually all that intuitive and they tend to bounce around quite a bit. What’s chic this year often goes out of style in the next. If you’re late to joining the party when its stocks are on the way up, you’re most likely just locking in inferior returns for the year upcoming.

In other words: do you really know what the market’s best-performing sector will be in 2022? Or are you just speculating, based upon past performance or an informed guess? If you’re with me this far, I’ll jump to the punchline. Valuation multiples for stocks will swing around from day-to-day, month-to-month, or year-to-year. But in the grander scheme of things, they are far less important than fundamental revenue growth. In the end, innovation ultimately wins.

In the short-term, the market is going to do what the market’s going to do. America’s largest funds might have liked software stocks last year, energy stocks this year, and then Bitcoin next year.

As individual investors, one approach could be to speculate on what’s going up and what’s coming down. But a much more effective (and rewarding) approach is to find really great companies and add to your investment in them over time. If the stock of your favorite company goes down, you’re buying in at a lower price. If its stock goes up, you’re adding to your winners. Rinse, repeat, and compound your gains.

[In tomorrow’s 7investing Subscriber Call, we’ll be highlighting the active recommendations that we have the highest amount of conviction in. Several of them have stock prices that have fallen in recent months in tandem with the broader market.]

Investing is still a very personal thing and there’s certainly nothing wrong with buying energy companies or lower-risk investments. But just make sure you’re buying them for the right reasons — like stability in your portfolio or collecting and reinvesting their dividends — rather than chasing after their short-term returns.

Long-term investing is still very much here to stay. Even if the financial media are trying to convince you otherwise.

In next month’s CEO update, Simon will take a closer look at the correlation between stocks and other asset classes such as real estate and cryptocurrencies.
Sign Up Today!Get full access to our 7 best ideas in the stock market for only $49 a month.