How I Find 10-Bagger Stocks in Retail | 7investing How I Find 10-Bagger Stocks in Retail

In most cases, I’m not picking stocks that have quick potential to become 10-baggers. Most of my 7investing picks have been retail companies that grow in a predictable, measured fashion. A retailer might have a good sales quarter or open a few more new stores than expected, but it’s not likely (or in most cases, not possible) to have the explosive growth we sometimes see in technology, biotech, and other sectors.

That doesn’t mean I don’t expect the stocks I pick to have 10-bagger potential. It just means that I’m realistic that the timetable will be an extended one.

You have to think long-term

Really good retailers have a long-range plan that takes time to execute. The chart below shows a fairly extreme example, but it gives you some insight as to just how long it can take. If you bought shares in Target (NYSE: TGT), Walmart (NYSE: WMT) and Costco (NASDAQ: COST) in mid-June 1995 all three would not have become ten-baggers.

Walmart has only increased by a little more than nine times your initial investment, while Target would have turned $10,000 into $382,000, while Costco would have made that same initial investment grow to $501,000. Yes, those are returns over 26 years, but building dominant nationwide (and, in some cases global) brands takes time. 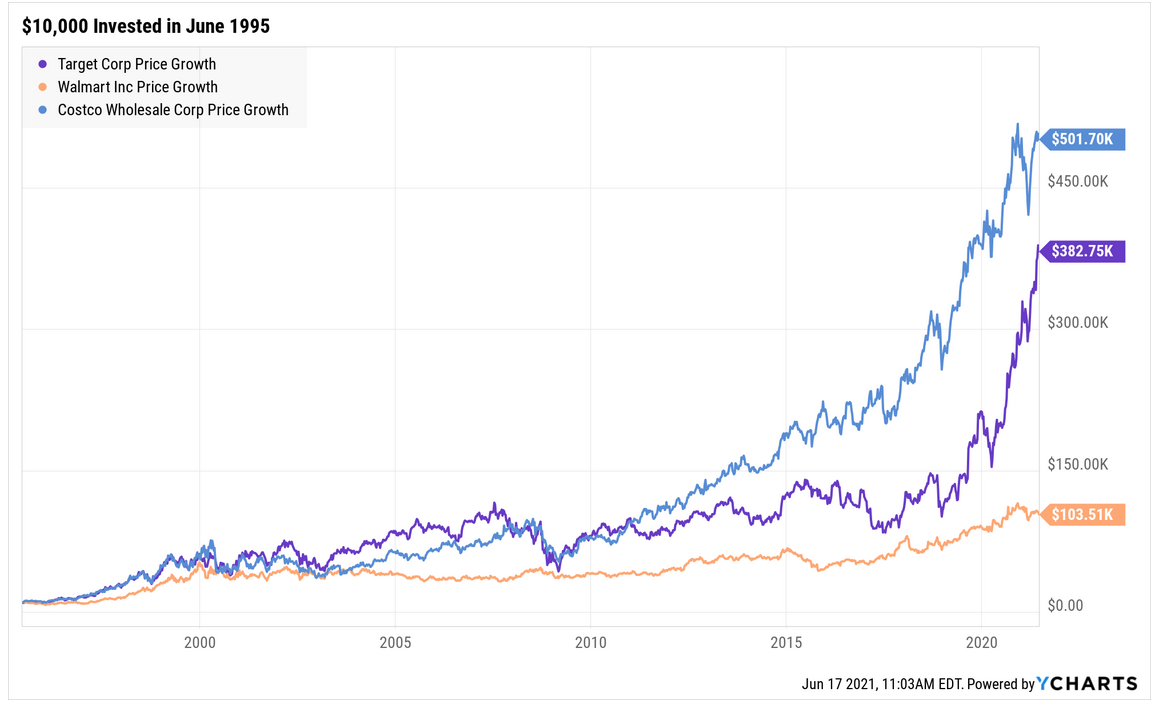 How I pick companies

I’m not making picks in the retail space expecting quick gains. Instead, I’m looking at the long-term prospects of the company and how it has executed. You want to see a business that has the potential to steadily grow its store count and customer base. In some cases, I look for the ability to grow same-store sales, but that’s not a metric that matters for certain retailers.

Dollar General (NYSE: DG) adds about 1,000 stores per year and those locations perform predictably. Each store will hit an expected run rate quickly, but the company won’t see big gains in same-store sales after that due to the nature of its merchandise and customers.

Most of the companies I pick will grow steadily over years, adding value and increasing their share price as they get bigger. That’s not as sexy as what can happen with tech stocks, where growth can be quick and stock prices tend to be more speculative/optimistic.

The good news, however, is that retail stocks tend to be less volatile. You may see fluctuation based on minor news in an earnings report, but the swings tend to be fairly small. That doesn’t mean you’ll never see big moves in share price — the market has shown that any stock can be subject to that happening — but in general predictable growth produces steadier stock prices.

A swing for the fences

Sometimes I identify a company that has gone public relatively early in its growth cycle. If the chain has proven its model, or at least shown that it works in some places, I might invest expecting a faster path to becoming a 10-bagger. That’s relatively rare, but it happens. So while my core portfolio tends to consist of low-risk, very long-term stocks, I do own a couple that have quick(ish) home run potential.

Mostly, however, I’m happy to buy really good companies and watch them grow over time. I still have a 20-plus year investment horizon, so I don’t need quick results. I love seeing the companies I own continue to execute, grow, and prove themselves to be great long-term investments. That may not be super-exciting, but I’m comfortable with getting rich slowly mixed in with an occasional riskier swing for the fences.